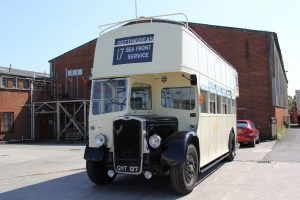 This bus was new in wartime to Bristol Tramways and Carriage Co. Ltd. and entered service in March 1941 from (we believe) Lawrence Hill depot. Its body was given a major overhaul by Bristol Tramways & Carriage Co. Ltd. in 1951 and it was sold out of service by the end of 1954, when it passed with several others to Brighton Hove & District. They converted it to open top, and subsequently repainted it in a cream and black livery.

It later passed to Thomas Bros. Port Talbot, South Wales and received a blue and cream livery. It then passed back to Bristol Omnibus Co. It has since been painted in Tilling green and cream (1975), original Bristol blue & white livery, cream and green Bath open-top livery (1985) and in Guide Friday’s version of its livery.

During 2004 the Group restored it an repainted it in 1955 Brighton, Hove and District Livery.