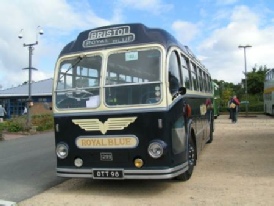 OTT98 (1299) is a Bristol LS6G with ECW bodywork.  The bus is part of the WHOTT Museum collection and its custodian is our member John Grigg.

The vehicle was new to Southern National Omnibus Company (Royal Blue) in September 1953.  It was withdrawn in 1970.