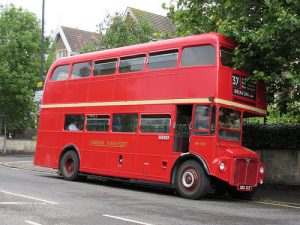 RM1363 is an AEC/Park Royal Vehicles Routemaster, with an original Leyland 0.600 engine.

The bus was delivered new to London Transport on 28th November 1962, entering service during December at Stockwell garage (SW), where it would have worked on routes 2, 2A, 2B, 37, 88 and 181. By 1977 it was based at Mortlake garage (M). It remained in service in London until August 1984.  It was then withdrawn along with many other Leyland-engined Routemasters, which London Transport regarded as non-standard, despite owning quite a large number of them.

It was sold to Southampton CityBus in May 1987 where it operated briefly.  It then passed to the dealer, Ted Brakell, and was bought by its current owner in August 1992.

Now that the remaining Routemasters have all been withdrawn  from London service, (apart from a very small number on “heritage routes”), lots of them have entered preservation.  But there aren’t very many of the Leyland-engined examples with un-modernised interiors, like this one.

Since then the bus has been in use for lots of events, but after a breakdown was out of action for most of 2013 and 2014.