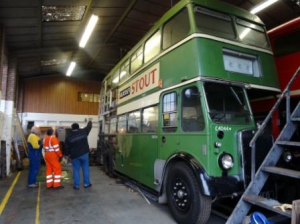 Built in 1948, C4044 worked from Eastville depot, Bristol (note the white disc near the fleet plate which denotes this) for most of its life with Bristol Tramways and its successor Bristol Omnibus Co. Ltd.

Its ECW body was given a major overhaul in 1957 by ECW, returning to service in May 1957. It was withdrawn from service in July 1962 and sold to Stoneman, Nanpean, Cornwall in September 1962 who used it for nearly 10 years.

It was purchased for preservation by Bristol Vintage Bus Group in March 1972 and was restored to its 1957 condition including contemporary advertisements, the condition in which it is still to be seen.

The 1972 restoration of the wooden framing of the body had gradually deteriorated and the bus was taken out of use.  It returned to the road briefly after several years’ absence in October 2007 to attend the Samuel Ledgard 40th anniversary.  It is in good running order but is now undergoing major rebuilding of the timber frame, which is progressing well.