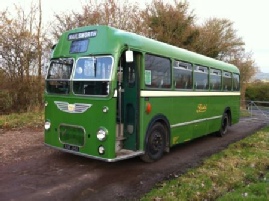 536JHU was new to Bristol Omnibus Company in 1961, and was based at Gloucester.

Constructed as a joint venture between Bristol Commercial Vehicles (responsible for the chassis) and Eastern Coach Works (who built the bodies), the MW was intended as a replacement for the Bristol LS (the Group’s example of the Bristol LS type is YHY80).

Powered by a 5 or 6 cylinder Gardner engine, some 247 vehicles saw their way into service with Bristol Omnibus.  Of these almost 200 were of the same design as 536JHU, with a small number being designed for bus and coach services and an even smaller number exclusively for longer distance coach travel.

536JHU entered service with Bristol Omnibus on the 7th March 1961 and was allocated to Gloucester where, along with sister vehicle 2513, she remained until withdrawn from service in September 1976.  In September 1977 a new life beckoned when 536JHU was purchased by Axe Vale Coaches of Biddisham (between Burnham-on-Sea and Cheddar) for school services, continuing in this role until 1979 when it was purchased by Biswell Language Services in Northampton.

Sold again in February 1980 to Brian Holloway of Northampton, she remained in his care for over ten years before reluctantly being sold to an ‘enthusiast’ from Gloucestershire in August 1990.  Unfortunately, the enthusiast was only out to make a quick profit and immediately sold it to travellers at a site near Dudbridge Railway Station, Stroud.

Having come to the notice of the local bus preservation group in Stroud, and fearing the vehicle would soon have a hole made in the roof for a chimney, it was purchased in September 1990 by Andrew Frusher.  With the vehicle in poor condition much work was carried out during the summer of 1993 including re-panelling and repainting.  She stayed in his possession until being acquired by Somerbus Ltd of Paulton, near Bristol, in May 1998.

During 2001 another change of ownership brought 536JHU into the hands of Rexquote Heritage Motor Services of Taunton, where it joined a large collection of other historic commercial vehicles.  Being placed on the market again in early 2003 it was purchased by our member David Cole, and brought back to its birthplace.  It has since been sold to its current owner.

The vehicle has received major attention to the engine in recent years. It is used regularly – after all, that’s what they were built to do!