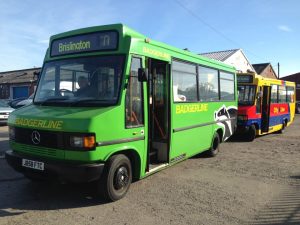 The bus stated its working life with Badgerline at Weston-Super-Mare and transferred to City Line in January 1996.  When it was withdrawn from service it was sold to VOSA where it was used to train vehicle examiners, before being bought by our member David Cole.

In 2010 David very kindly donated the midibus to the Group to use to transport members and our sales stand to and from rallies.  It has since been re-painted to give an impression of how this class of bus might have looked had the Bristol Omnibus Company livery still been in use.