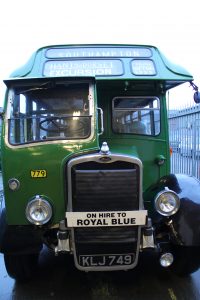 KLJ749 is owned by members Paul Tovey and Chris Knight.  This bus the survivor of a pair built for Hants and Dorset on Bristol LL chassis with Gardner 6LW 8.4 litre engines, with bodywork by Portsmouth Aviation.  They were the first 30′ long buses bought by Hants and Dorset.

KLJ749 was given the fleet number 779 and was originally painted in coach livery, but was repainted into standard bus livery in 1954.

It was withdrawn from service in 1965 and sold to Atomic Power Constructors at Dungeness, and then to a fruit farm in Kent, where it was bought for preservation in 1983.  Immediate work had to be done to rescue the cab from collapse, and then the body was rebuilt and restored to its 1960 appearance during 1986 and 1987.  A hard life outdoors and several accidents had left the body somewhat distorted, but the lack of drawings or plans meant that restoration was a challenge and had to be done section by section so as not to lose the shape.

A variety of other work was done since, including a rebuild of the top end of the engine during 2004.  It joined the Bristol Vintage Bus Group in 2008 and it has since been repainted and had its seats re-upholstered.