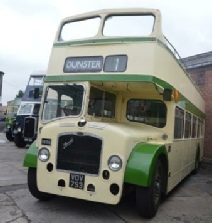 VDV 753 was new (complete with a roof) to Western National Omnibus Co. in December 1957.

She operated with Western National until May 1979, and during her life with the company was converted to open-top in May 1973.  After being lent to Eastern Counties for a few months she was sold to them in May 1979 and remained with them until May 1987.

She then went into preservation, before being bought by Quantock Motor Services in October 2009.  They used her in service on the “Exmoor Explorer” route until 2011.

She was bought by Bristol Vintage Bus Group members in December 2014 and arrived at our base in January 2015.