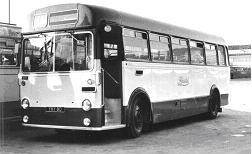 YHY80 was built and delivered to Bristol Omnibus Co. as a bus-bodied dual purpose seated vehicle with 41 seats and a Gardner 5HLW engine.

The bus was delivered in 1957.  It was rebuilt and modernised by Bristol Omnibus Company in 1972 as part of a trial batch of seven vehicles.

The modernisation included fitting a larger 6-cylinder Gardner engine, updating the exterior look of the vehicle, similar to the latest Bristol RE vehicles. The interior was also updated with flourescent lighting, opening up the cab area to resemble the RE vehicles and incorporating formica interior trim.

Due to the introduction of the Bus Grant Scheme when it became cheaper to buy new REs than to update old vehicles, this modernisation programme was cancelled with only the seven initial vehicles being completed. This vehicle then worked in OMO (One Man Operation, as it was then known) livery and National Bus Company green for the following five years.

It then was used by the Weston Carnival Club for carrying disabled children on outings before being sold to a car dealer who intended to remove the engine for use in a boat and scrap the remains. This never happened and the vehicle was left in a field at Lower Langford, Somerset for just over a year. Finally it was bought by the Bristol LS 3004 Group and rallied for a number of years. It was then laid up and major engine repairs undertaken in the mid 1980s.

For a number of years now the bus has been undergoing major restoration and is not currently on the road.